Our weapons are the photographs we take, that like napalm burn images into the consciousness of the minds of our viewers. My keyboard express words as bullets, social media and the internet is our method and means of launch and delivery for every bomb of truth about the atrocities and human rights violations, the breaking of international laws, at the hands of the Occupation in Palestine.  The Occupation lead by an Israeli government of extremist Zionist ideology and racist sense of superiority exerted as one human over another under the guise of religious entitlement.

Daily killings, fascist brutality, false imprisonment of children, women, men and the sick.  Israelis armed 24/7 walk the streets in and around their illegal settlements built on stolen land, many look for active confrontations with peaceful Palestinians for no other reason than blatant hatred.

A country once free and fertile, now butchered and segregated from the inception of Zionist Occupation whose purpose was never to reside in this land with what they were given by master colonists who had no right to give what was never theirs in the first place.

I do not write from a bias or subjective perspective.  I write based on the documented history and the many conversations and interviews I have had with Palestinians and Israelis, Christian, Jew and Muslim.  All of whom agree what is and has been happening in Palestine for the last seven decades is a gross injustice and series of crimes against humanity as a whole. 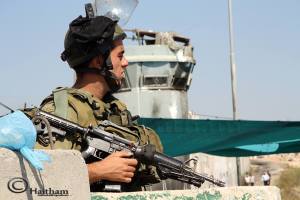 From the illegal settlements that have been strategically planned and built from the beginning to spread like a malignant cancer on the land, enforced by an apartheid wall and fences, with access to and from via heavily guarded and armed checkpoints.

Children who are terrorized daily on their way to and from school, women and men harassed and attacked at random by IOF, villages stormed and raided in the dead of night for what IOF describes as a necessary approach to control a population by catching them off guard, because if such raids are attempted in broad daylight the resistance and ensuing conflict would be chaos.

IOF targets children and youth, raiding family homes, restraining frightened parents, physically and forcibly removing children from their beds, lining them up against walls in their homes, photographing them, mapping their homes to determine where each child sleeps, in what rooms and in what beds, interrogating them and their families, taking names and ages, and then they leave.  But not for long, within days, sometimes only hours, IOF return to these homes and arrest and detain these children on false allegations of aggressive actions taken by the children against IOF or Settlers.

The oppressed have become the oppressor.  I speak of course of the generations of European Zionist Jews that settled in this land during and since the Nakba between 1947 and 1949.  Jews that were survivors of the Nazi led Holocaust.  Perhaps born out of a need to exact revenge to victimize others in order to empower themselves, these newcomers to Palestine quickly exerted the same horrific violence and led massacres of the Palestinian people who had lived in this land peacefully long before the extremist European Zionists arrived.

Over the last seven decades this mentality has not changed and in many ways become that much worse.  What is and has been happening in Palestine is nothing less than the carefully orchestrated, executed and systematic genocide of an entire Arab population that consists of Christian, Jew and Muslim alike.  Just since October 2015, there have been nearly 250 Palestinian men, women and children murdered, martyred by IOF.

There are currently more that 700 children sitting in Israeli prisons.  Children who have been brutalized physically, psychologically, and emotionally.

Where is the world on this issue?  Why are the western governments providing continued monetary and military aid to this insane Zionist regime?  Where is the Arab league on this issue as well?  They turn a blind and appoint an Israeli representative to the Arab League just this month.  This is in a classic turn phrase, a mutiny and betrayal to any possibility of a unified and peaceful Middle-East, let alone peace for Palestine.

It is only through ongoing intervention by world human rights organizations, initiatives, and movements in addition to the ongoing BDS and anti-apartheid movements that change is going take place.  Even these are not enough.  It is going take those of us as activists, freelance journalists, writers, photographers and videographers, through the power of the internet and effective use of social media to keep the spotlight on the oppressors, on the Occupation, reflecting back to the world the crimes being committed, and exposing that the world’s silence condones the violence and their complacency is contributing to the most heinous and dark side of humanity; Occupation, apartheid and genocide.

4 Corners Production of “Stone Cold Justice” a docu-news program that shows overwhelming evidence about the treatment inflicted on Palestinian children in Palestine and in Israeli prisons.