Life in Palestine is one of constant contrast between normal day-to-day things and conflict between resistance and Occupation Apartheid.  Both circumstances speak to the strength and resiliency of the Palestinian people.

Though there is no escaping the reality of life under Occupation Apartheid.  The efforts and fight to live a normal life is an inherent objective of every Palestinian.

Conflict in Palestine has become as routine as breathing.  But unlike breathing of our own free will, it is like breathing through a respirator, breaths we wish to take on own taken but instead with the aid of a machine and the machine is resistance.  Last Friday, January 16, 2016, these photos, taken by photo journalist, Ahmad Hasaballah in Gaza, of strong, young and determined Palestinian men, wanting only peace, wanting the same life and future we all want and some are lucky to have, were taken during a protest against Occupation Apartheid along the border of the Gaza Strip, Nahal Oz.

When the outside world see these images in mainstream western media, they assume that the Palestinian youth are the aggressors; but such is mainstream, western media.  These young men cannot protest, in the most peaceful ways without being bombarded by occupation forces who shoot live rounds of ammunition, and launch gases, each with the intention of indiscriminate harm and is some cases death.  In an effort to counter affect these brutal attacks, Palestinian youth light fires to rubber, in the hope the smoke will shield them from attack.

Armed with nothing more than stones, they continue to protest, to demonstrate, in the hopes that the world take notice, not forget them, not forget that they live in the world’s largest open air prison, imposed by occupation apartheid.

It is scenes like this that occur all over Palestine daily.  The heartbeat of Palestine beats forever strong.  The hope and fight for freedom is undying.  What the Zionist Occupation Government strives to break in spirit, serves only to strengthen the resistance and continued resistance is how freedom is won. 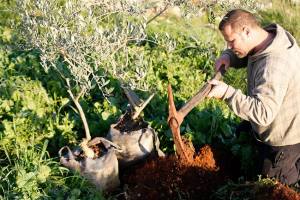 Resistance comes in many forms, determination, passion, and desire for freedom is humanity’s greatest desire and hope.

Here in the beautiful village of Bil’in, just outside of the city of Ramallah, my partner, Haitham Khatib plants young olive trees on his land.  The trees themselves are a testament to the strength and resiliency of the Palestinian spirit.  And like the green branches of these beautiful and fruitful trees, they bend, yet not break, only grow stronger, day by day, just as every Palestinian child, adolescent and adult does.

Tilling and caring for the land is a part of the rich heritage and culture that is Palestine.

Haitham takes great pleasure and pride in his land, as all Palestinians do.  But these images carry a power statement of a resistance to Zionist Occupation, a statement that Palestine will be free, that her people are strong, determined, strive to live with dignity and humanity.  Together Haitham and I strive to tell the world the truth about Palestine, her people, their lives, their hopes and dreams.  Together through word, images and videos, we will achieve this and the world will take notice, see the truth of what is happening daily in Palestine under Occupation Apartheid.